The important thing to remember when banding chicks is take your time! Band your chicks over a counter or table with a towel underneath. If you drop your band you can easily retrieve it. Also, if the chick is dropped it doesn’t fall to the floor or cold counter. The age to band varies between species but is generally between 8 and 13 days. You can tell by looking at the ankle joint (the joint where the toes come together) and the size of the band should be able to slide over it with little struggle.

Have the bands, a toothpick (or other simular instrument) and some lubricant ready. Should you be late in banding the chick a dab of lubricant will come in handy. Just a very small dab on the chicks leg or directly on the band. After applying the band wipe any excess lubricant away. There should be no open full feathers to worry about yet. Chicks should have closed eyes still or just opened. Their wing feathers should still be pretty much still in quills during banding. Although not necessary place the bands “right side up” for easier reading. Right or left leg does not matter which leg your are banding. Try not to place 2 bands (one plastic one aluminum) on the same leg. Use the other leg instead. One band aluminum for permanent identification and one colored plastic for sexing, family band or whatever method you are using to track/recording in your records.

Hold the chick firmly but in such a way as to not cut off its breathing and so that you don’t harm it. Remember, their bodies cannot tolerate compression.

Put a little bit of lubricant on the chick’s 3 toes and slide the band over those three front toes then slide over the ankle joint.

The band now should be in the proper location between the ankle and the elbow joint.

Recommend: Check on the chick the nest next day to be sure that the band has not slipped off and that there are no scrapes or irritations on the foot or the leg or that the band remains on the lower leg. 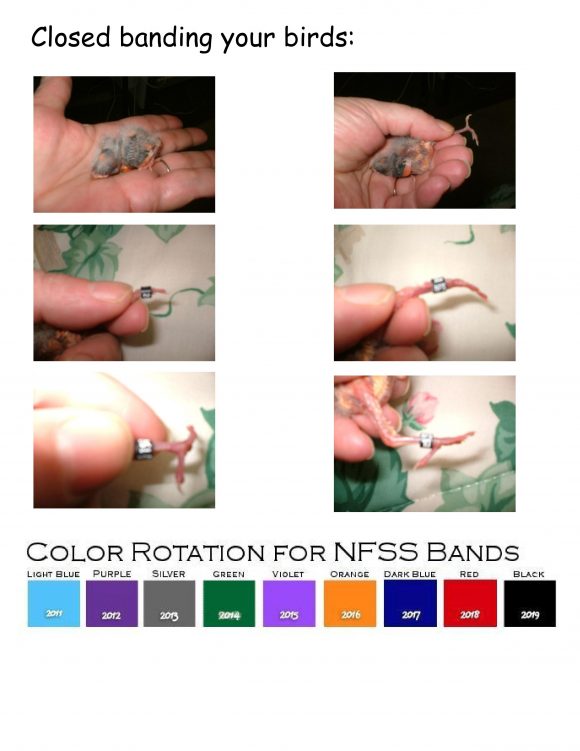