You are here: Home / Legislative News / America COMPETES Act of 2022 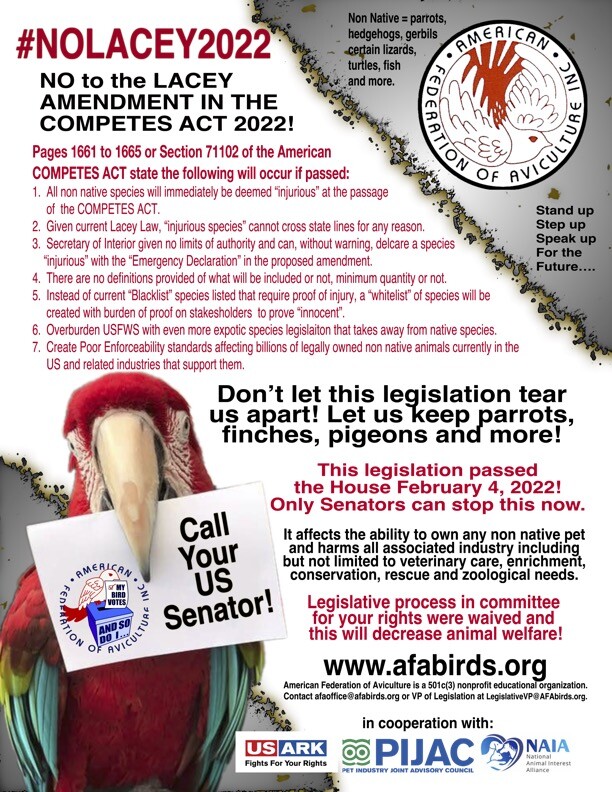 BEWARE
America COMPETES Act of 2022
CONTAINS LACEY ACT AMENDMENTS
The alleged purpose of the 2,912-page America COMPTES Act[1] is to strengthen the nation’s economy and strengthen national security. COMPETS is an acronym – Creating Opportunities for Manufacturing, Pre-Eminence in Technology and Economic Strength. But it also contains provisions that if adopted would prohibit access to thousands of species of non-native wildlife!

But beware -if you are involved with native and/or non-native wildlife because buried in a 2,912 pages — H.R. 4521 (COMPETES Act of 2022) are several Lacey Acy amendments that would reduce or eliminate trade in non-native wildlife. The proposed amendments (pages 1661 – 1665 attached) would impact not only commercial activities (importers, distributors retailers, breeders), but also affect owners of any non-native wildlife species that does not end up on a new “White List.” The proposed amendments would also ban the interstate movement of a listed species so a pet owner would not be able to move to another that if their birds, reptiles or aquatic organisms if their species are not the clean list.

Section 71102 would amend the Lacey Act. By reinstating the ban on interstate transportation or “transport between the states” of species listed as “injurious” under the Lacey Act and deleting shipments “between the Continental United States.”
Provides the Secretary of Interior emergency listing authority to “prescribe by regulation an emergency designation” that would prohibit for not more than three (3) years importing a “species of wild mammals, wild birds, fish (including mollusks and crustaceans), amphibians, or reptiles, or the offspring or eggs of any such species” found to be “injurious to human beings, to the interests of agriculture, horticulture, forestry, or to wildlife or the wildlife resources of the United states.” An “emergency designation” is not limited to species “not in trade” but would apply to species that have been in trade for decades without any adverse impacts. An “emergency listing” ban would be effective immediately after published in the Federal Register unless an extension of no more than 60 days is allowed. The process prevents interested parties an opportunity to provide input prior to listing. During the “emergency prohibition” period, the Secretary will complete a risk assessment to determine the species status. While such a process may be appropriate for species not yet in-trade, shutting down trade in species in-trade without proper due process raises numerous issues.

The COMPETES Act also creates a “Presumptive Prohibition on Importation” on any non-natives species (wild mammals, wild birds, fish (including mollusks and crustaceans), amphibians, or reptiles, or the offspring or eggs of any such species) unless the species appears on a “White List” – if not on the WHITE LIST all other non-native species will be automatically prohibited unless during the year prior to adoption of the COMPETES Act, a species was imported into the United States “in more than minimal quantities” (to be defined) or transported within the United States, Puerto Rico, or its territories or possessions, or
The Secretary determines after providing an opportunity for “public comment that the species does not pose a significant risk of invasiveness to the United States…”

The COMPETES Act is likely to pass the House of Representatives within the next couple of weeks. Once it reaches the Senate, it will likely be reconciled with the Senate’s U.S. Innovation and Competition Act, or USICA which does not include Lacey Act language. As soon as action plan to respond is activated will forward recommendations.

A special thanks to Phil Goss and USARK[2] for alerting the herpetological community to this years’ attempt to sneak through significant revisions to Lacey that impact anyone involved with non-native wildlife including captive-bred animals.
[1] https://docs.house.gov/billsthisweek/20220131/BILLS-117HR4521RH-RCP117-31.pdf
[2] United States Association of Reptile Keepers – www.usark.org