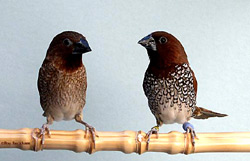 The Spice Finch, a.k.a. Spice Bird, Scaley Breasted Finch, and Nutmeg Finch, is a member of the Lonchura family. There are 12 sub-species over Asia where it originates. The sub-species pictured is Lonchura punctulata from India. Other than the Philippine sub-species, the rest of the 10 Spice finches are relatively unknown in aviculture.

This species gets it’s common name from the spice ships it was brought to Europe on. There are feral populations of Spice finches in virtually every port of call along the trade routes from Australia, to Puerto Rico where ever the climate supports them. In Puerto Rico, it is reported that the Spice finch has become the host species for the Pin-tailed Whydah.

The Spice finch is an easy species to care for as it is even tempered, and not too demanding. It is not an easy species to breed indoors as several factors seem to need to be in place before they are stimulated to breed. They do well in large outdoor flights. They can be bred indoors, if light intensity and humidity are paid special attention to. Mine are bred indoors usually coming into condition early in April, with the first spring rains here in Michigan. They breed until late August or early September, getting in up to, 3 clutches. Once you have a pair breeding, they are excellent parents even feeding the begging offspring of other species. Offspring are slow to mature taking 12 to 18 months to reach sexual maturity depending on the time of year they hatched out. Up until the juvenile moult, Spice young are a soft smoky brown which, in and of itself, is attractive.

Adding to the difficulty in breeding, is the fact that Spice are monomorphic. In good lines it is difficult to tell the difference between the sexes so buying 4 to 6 birds at a time is recommended. When buying Spice in groups, it is best to choose both larger and smaller birds of good conformation. Most times, hens will be slightly smaller, but not always. Cocks will eventually give themselves away by eking out their squeaky little song which is also difficult to hear. Hens, DO NOT SING… EVER! They do make several vocalizations such as contact calls, warning calls, and good eats calls, which consist of mostly PEEEE! or chutter chuttter, chut.

Spice thrive in a larger size cage. The one pictured is 36″ x 36″ x 18″ and houses one pair each of Spice and Zebra. My other breeder cages are 30″ long x 12″ deep. They adore swings and love to hang like bats from anything. They are very lively birds that zoom rather than fly. Baths are most appreciated too.

The diet for all my finches consists of soaked seed, dry seed, egg food and greens as the basis. Melons and cucumber are also enjoyed as are green seedling grasses. Mealworms are devoured with relish by Spice and fed to their young more consistently than egg food. Ratios are changed due to season. More soaked seed during breeding, more dry seed during resting.